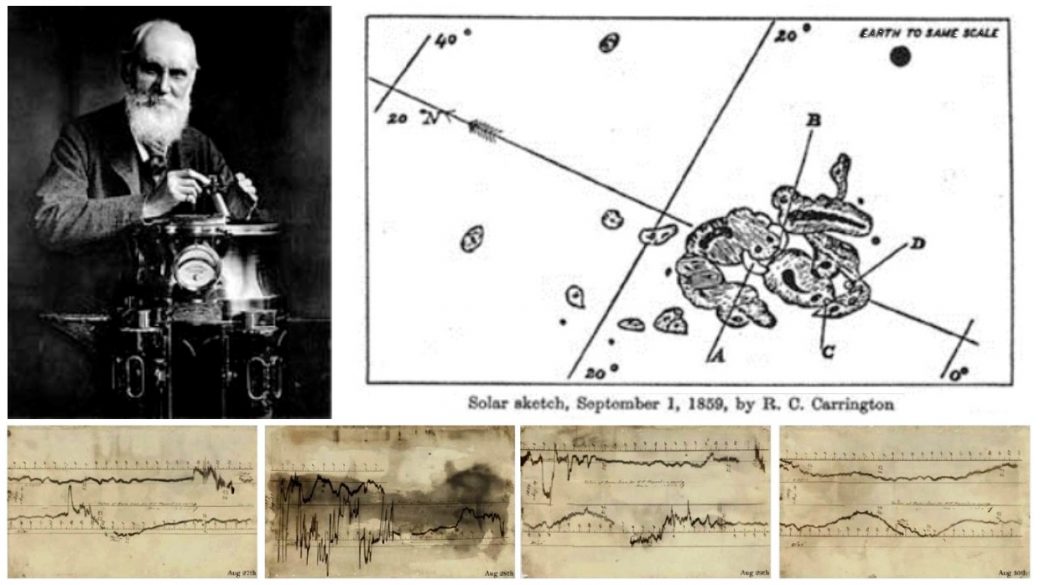 ‘While engaged in the forenoon, in taking my customary observation of the forms and positions of the solar spots, an appearance was witnessed which I believe to be exceedingly rare.’

‘The image of the sun’s disc was projected through a screen on to a plate of glass, under a power which presented a picture of about 11 inches diameter. Within the area of the great north group two patches of intensely bright and white light broke out.’

‘My first impression was that by some chance a ray of light had penetrated a hole in the screen, for the brilliance was fully equal to that of direct sunlight, but I saw I was an unprepared witness of a very different affair.’ 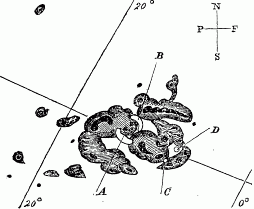 ‘In this lapse of five minutes, the two patches of light traversed 35,000 miles, as may be seen by the diagram. On this scale the section of the earth is equal to the detached white spot B to the north.’

‘The impression left upon me is that the phenomenon took place at an elevation considerably above the general surface of the sun and above and over the great group in which it was seen projected.’

‘It has been gratifying to me that our friend Mr Hodgson chanced to be observing the sun at his house in Highgate on the same day, and to hear that he was a witness of what he has also considered a very remarkable phenomenon.’

‘Towards four hours after midnight on September 2nd there also commenced a great magnetic storm, which subsequent accounts established to have been as considerable in the southern as in the northern hemisphere.’

Notes from a presentation to the Royal Astronomical Society, November 1859.

The ‘Carrington Event’ was the largest recorded EMP and geomagnetic storm that we are aware of that that has hit the Earth, lasting 10 days from Aug 28th to Sept 7th 1859.

English Astronomer Richard Carrington was one of many people studying sunspots which occur naturally across the sun, sketching their shape. By the time he had rushed to find someone to witness the event, the bright white light he saw on the Sun had disappeared. He was the first person to witness a huge Coronal Mass Ejection (CME) from the Sun. Named after Richard Carrington, this is now referred to as the ‘Carrington Event’ or ‘1859 solar storm’.

The 1859 CME was fast, really fast. It reached Earth in just eighteen hours, a Sun to Earth trip that normally takes three to four days. To put it in perspective, that means that the CME travelled across space at over 8 million kmh (5 million mph). The 2nd September was notable, because the CME was the most intense and caused the skies around the world to light up with an intense display of a very bright Aurora Borealis (Northern Lights). Usually only seen in the far north, the Aurora was visible much closer to the equator than normal. Over five days in September it was obvious as far south as Hawaii, Cuba and Chile.

This light display around the world generated huge interest at the time in both the general public and the scientific community. A time when, In London, the world’s first underground railway was under construction, the Reuters News Agency was in its eighth year and the electric telegraph network had just been developed.

Bearing in mind that the only electrical technology in popular use at that time was the telegraph, the 1859 CME had dramatic effects. The electric telegraph was the brand new technology at the time for gathering news items and, as soon as it hit, telegraph systems and wires in Europe and the United States began to fail or behave oddly.

During this space weather event the telegraph appeared powered by the electric currents set-up in the atmosphere as a result of a resulting geomagnetic storm that came with the CME. The telegraph experienced induced voltage increases, in some cases delivering shocks to operators at stations along the lines. Telegraph pylons threw sparks, and fires started at a few of the stations. Some operators reported they could use their systems without the need for a battery, and could even continue to send and receive messages, despite having disconnected their power supply.

Newspapers reported on the public’s sightings of the Aurora Borealis and effects on the telegraph. One newspaper in 1859 reported you could light a chemical match using the sparks from the telegraph equipment.

On Saturday September 3rd, the London Daily News printed, ‘The electric telegraph communication with all quarters was singularly disrupted and very uncertain on Friday, owing to some mysterious atmospheric influence. No telegrams were received from France till after the close of the Stock Exchange.’

And all of these effects in a society with limited technology use, unlike today…